Thank you! I’m really excited to see where the community takes it because many of the features like time locking deposits and staking your NFTs are optional.

Babylon already has their own NFT’s called prophets which give depositors 1% bonuses on their BABL mining rewards if they stake it inside a garden. It would be fairly straight forward to implement a flat 2% bonus for BAYC and 1% bonus for MAYC. These NFT’s don’t ever leave your wallet so listings on Opensea are unaffected, and this is the current design the prophet NFTs were built around so it’s nothing new to Babylon.

Thanks for your support. Ping us if you have any questions

Superb idea! Hope it will do good to the community

Thank you! <3 There are several paths we can take here. This proposal is asking the treasury to seed the investment club with at least 10k APE tokens, but if the community decides not to fund the initiative with the treasury, they will still be able to participate in the garden individually.

I truly think it’s a win-win for Babylon and the Apecoin DAO treasury as we are providing them with an immediate source of revenue, at no cost to them or developer work hours. 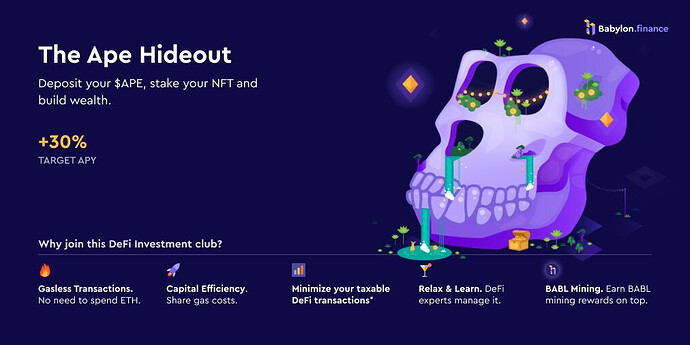 Just uploading a quick explainer image to simplify this for people

Nice to meet you you project looks awesome.

I’m interested in hearing more how the prophets work. Are they a tokenized asset tied to your actual asset? What if the asset changes hands?

I misread I thought it was the actual token being staked, but its $APE coin oh okay. I see.

The Babylon Prophet NFT’s are are erc721 assets that you can “stake” in your garden in order to earn more BABL mining rewards. All prophet NFT’s are unique, and their bonuses range from 1% - 4.5% for different activities in the garden. For example, there are LP bonuses if you are a simple depositor in the garden. There are Creator and Strategist bonuses if you are helping to steward and direct the assets in a garden. Finally there are Voter bonuses, which reward extra BABL tokens to those who vote to implement strategies, and then those strategies finalize in profits for the garden.

The prophet NFTs themselves never leave your wallet when you “stake” them in a garden for these BABL mining bonuses, and you can still list them on Opensea or move them around at your leisure. Also, neither BABL tokens nor APE coin from this garden will be tied to your NFT. You are welcome to sell or transfer your NFT at any time and you will not lose assets inside the garden, however you will be forfeiting any pending BABL bonuses coming from strategies that haven’t finalized yet.

I think keeping the Babylon Prophets the way they are for this garden is fine, but it would be fairly easy to give every garden member with a BAYC NFT an extra 2% LP mining rewards and every member with an MAYC gets an extra 1% LP rewards if they “staked” their Ape or Mutant.

Another idea to explore is potentially giving BAKC .5% bonus LP mining rewards. I think Kennel Clubs need some love and utility too. <3

Yeah, as Amplify said, the garden supports both things out of the gate:

It’s worth noting that unlike other staking proposals, this approach generates real returns and uses them to buy more $APE coins and distribute them back to garden members. It doesn’t require the treasury to give out more $APE.

I don’t really like the idea of a protocol being endorsed for ape staking before we have our own native staking with apecoin dao. It all looks good from a project perspective . Also having people lock up their apes and their assets in a new protocol that is not very heard of doesn’t align with the brand imho. Gonna be a no from me. The project has TVL of 27m total. We would probobly be doing them a much bigger favor than the other way around

Also i just want to state that $ape is one of the most liquid altcoins in all of crypto. We should be very careful where we put our assets.

Thank you for your comments.

I wanted to clarify that any sort of time lock on deposits is 100% optional. If you decide to stake your NFT for additional rewards, the NFT doesn’t ever leave your wallet or get locked. Babylon is non-custodial and you will always retain 100% control of your assets.

I also wanted to highlight the flexibility of Babylon gardens with regards to your comment about “native Apecoin DAO staking.” Whenever Apecoin DAO implements official staking mechanics, the APE garden on Babylon will simply direct capital to that contract instead of whatever strategy it was performing before. In this way, the APE garden would still be a more capitally efficient way to accumulate APE coins because you get the liquidity mining rewards from Babylon on top, which you can sell for APE.

Would you rather spend hundreds of thousands of dollars and several weeks building your own alternative than trusting a live DeFi protocol? We have had several audits already completed.

It’s important to reiterate that Babylon is completely non-custodial and you would always retain custody of your assets. Regarding your ape NFTs, they would never leave your wallet

I was actually just stating my honest opinion. I do appreciate the condescending reply from the founder though.

To answer your question, Yes I would rather we do it ourselves. I have never heard of your platform. And the $ape would not be non-custodial. Unless you guys want to make something that let’s us keep our $ape coin and still earn yield? If we did this plan your TVL would triple overnight. Also, we don’t need to save money on something so crucial and you implying hundreds of thousand of dollars is a bit of a stretch. I don’t think the apecoin dao should come out the gate with staking effectively full endorsement of you project.

This is not a win-win it’s more of a fast solution - major partnership and co-sign for your relatively unknown project. Let’s be honest, you want the co-sign and the TVL

I appreciate your opinion but there seems to be a small misunderstanding due to commonly used terms like “staking.”

Although possible, this proposal is not attempting to tap into the remain APE supply in order to distribute it to others. This is what most people think when they hear APE coin staking. Instead, we are merely suggesting the treasury seed the garden with at least 10k APE coins in order to earn revenue for themselves.

The “staking” we’re talking about is just depositing APE tokens into something that generates yield, in our case that’s a garden on Babylon. Users on ribbon finance or yearn finance participating in their APE vaults are “staking” their APE, but they are not tapping into the remaining APE supply.

Appreciate your quick reply. Thanks for being straightforward. I think there is a bit of a misunderstanding. As Amplify mentioned, it doesn’t require anything from the DAO, the 10k seed is also optional. It would be up to each $APE holder to choose whether to deposit or not.

I don’t see why it’s not a win-win. Babylon would potentially receive TVL and APE holders will have more utility for their coins at no expense. It’s up to them to stake them in the garden or not. It has literally no downside.

Also, the other staking proposals are literally asking for hundreds of thousands of dollars and weeks of development. 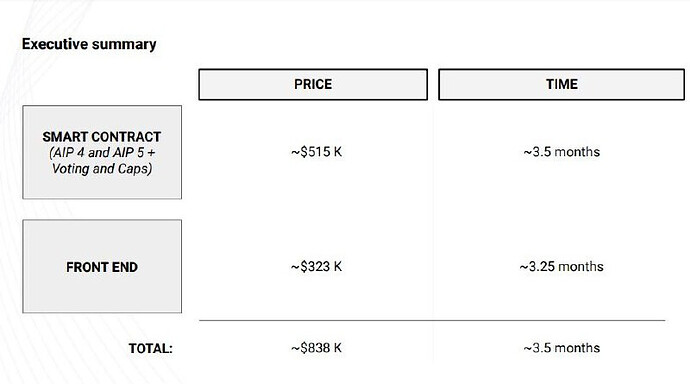 @Koko fyi, here is the comparison with the other proposals.