Abstract:
In an industry that’s unfortunately no stranger to scams and rugs, @zachxbt has done an unbelievable amount for our space. Especially for us– here’s a recent incident where he helped out an Ape (tweet).

@zachxbt’s reputation precedes him. He calls out bad actors, ruggy projects, and helps advance this space forward. Much of his work can be found on his well-known Twitter account.

Here are also some articles he’s published on Mirror:

Additionally, a centralized look of his work in calling out bad actors can be found at investigations.notion.site.

All of what @zachxbt does is for free- hundreds of hours go into his findings and reports. 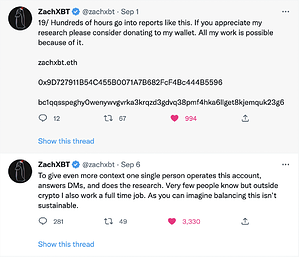 1204×1032 269 KB
While @zachxbt appreciates donations he never has asked for money and never will.

He’s been acknowledged by @beeple and also has a similar NounsDAO proposal championing his work. I think we should follow suit and give @zachxbt some $APE as a show of appreciation for what he brings to our space.

Author Description | A brief background of yourself
You can find me on Twitter @8zalNFT.
The name “8zal” is an acronym of my Hebrew name: “Avraham Yitzchak Tzvi L.”– ie I’m not @zachxbt and have no idea who he is.

Team Description:
H/T to @OGDeathbot who initially conceived of this idea.

Motivation & Rationale:
We want more people like @zachxbt in this space. Does this mean that we should make donations to everyone? No– but I think many would agree that we should recognize the GOAT and all of the good that @zachxbt continuously brings to this space.

Specifications | A detailed breakdown of the platforms and technologies that will be used.
N/A

Steps to Implement:
The only step to implement is sending @zachxbt the funds. Funds should be sent to the wallet address on his official Twitter page => zachxbt.eth.

Timeline | Relevant timing details, including but not limited to start date, milestones, and completion dates.
Immediately upon approval.

This is a tough one for me. There’s no doubt that Zachxbt is invaluable to the space and has helped many users recover stolen funds.

I did a quick search for “Zachxbt donations” on Twitter and he does often drop his address for donations.

On one hand, it would be nice to have Zachxbt’s attention through a historical donation. On the other hand it opens up the door to making similar donations.

How did you arrive at 6,942? Obviously it’s a meme number lol, but was there any other analysis? Knowing the average donation made to Zachxbt would add some context.

Hello. There are some technical issues that can arise from this type of proposal. I am informed and knowledgeable on his contributions to the greater crypto space.

This could open up a situation where his information could become vulnerable in the future. It’s worth being aware of this risk, and figuring out a safe way to proceed.

This will never pass as he did a piece on machibigbrother, and as we all know, machibigbrother is very influential in the space, with many apecoin [votes] at his disposal.

I am glad however you are bringing more awareness to his twitter feed as it is a valuable resource for any crypto and nft investor imho.

ZachXBT is great, and he does amazing work at times that has helped apes, but I personally think this would be better suited for individual donations versus DAO funds as:

Love what Zach is doing but personally I don’t see how this provides value to the DAO apart from him aknowledging the gesture on his socials. I would prefer to see the funds used to support community based projects.

Thanks for sharing your idea and your hope for some support for zachxbt.

I cannot say I know enough to vote either for or against, but a similar vote in Lil Nouns just finished a few hours ago. Do you happen to know who may have proposed that idea there? I guess they are still waiting for the Nouns DAO to also vote.

Not that we’re the same community, buit would be interesting to see if their vote reflects our community’s sentiments.

Thanks for your reply,

Excellent points- thanks for sharing!

Right- he may often drop his address, saying “donations are appreciated” but he never explicitly says “please donate to me.”

Yep that’s a great point- even if it doesn’t seem likely to pass (which seems to be the case) I’m sure the proposal itself will be appreciated by him.

Thanks for the reply! That certainly appears to be the consensus

This seems to be the general consensus as well-- all good and thanks for the reply!

Good point and am not sure- yep, would be interesting to see how they vote on the matter.
It seems the consensus is not go this route, which is totally fine.
Thank you everyone for the feedback and weighing in!

@8zal has requested to withdraw their application. This AIP will be moved to and remain in the Withdrawn AIPs category.