Election results and advice from FWB

The community has twice now risen up against whales to create its own outcomes using raw elections.

First, Cartan was displaced after some allege that unscrupulous activity from whale accounts attempted to vote up AIP-183.

Second, Degentraland didn’t make SC after it was alleged that whales were backing him using unsavory tactics.

Voting in @Gerry @veratheape and @BoredApeG over @Degentraland’s whale backing is a huge win for the raw election process.

But I hear more and more people in the BORED AIP coming up saying that we can’t trust elections to give us the best people for working groups. This simply flies in the face of what we’ve just seen now… twice.

Having SC appoint 3 of WGv0 isn’t in line with democratic elections, even with PH from FWB seeming to back the notion that important positions in Treasury and Operations can’t be trusted to elections.

I think the results of AIP-183 and SC show they can.

Rework the part of the BORED AIP that lets SC pick 3 WGv0 Stewards. If it needs to be voted down for this to change, we vote it down and change it.

Agree with you here Mantis, I would prefer seeing groups of people or individuals coming out with direct solutions to problems instead of having an entity or a group of people in charge of finding more people to solve “x” problems. Seems like another layer of bureaucracy to me. Could work tho? We’ll see…

Not that I’m in any way defending Degentraland here, but the actual narrative may be different than the perceived one. The data shows he actually had the popular vote, and a large voter/s came in late to push others higher. 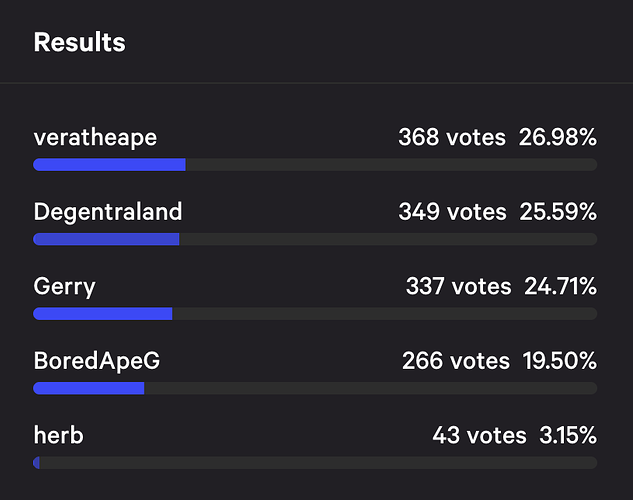 There is a solution that can help the DAO even if this thing passes as is and SC gets to appoint 3 Stewards. (BAD BAD BAD)

The Supervisor role in Cayman Foundation structure is so far unused by the DAO. The Supervisor represents oversight of SC and an opportunity for international decentralization. I’ll be pushing for it hard during the transition phase.

Also, if you haven’t added your comments to the Prop House AIP I’m putting together, I would love your commentary. We align on a lot. AIP Draft — Degen Prop House (DPH) - Google Docs

How I reconciled this part with myself was to see the SC allowing to appoint 3 stewards as it is 1 person each, and they literally pick who they want to reward and work with and we must remember this is for a very short period. However, I think we get to the fully voted for stage very soon.

I think people decided these figures made more sense, due to the ‘rumors’. Although I would like it noted that I think some of the communities ‘call-outs’ are misplaced. 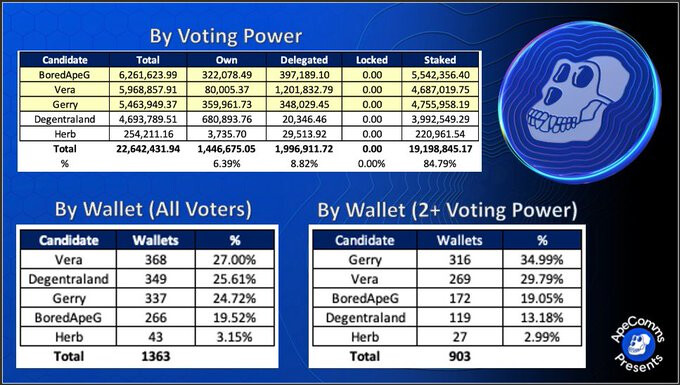 I think Eajay happened is actually agains the basics of the foundation itself and should never be posted as a proposal. So we have to cancel it. And Im very serious. This is a legit trouble.
It’s always must be elected and vetted. Appointing non vetted employees it is specially dangerous and unsafe, regardless of how good people are or can be. It’s just not ok. I think they must to step down immediately for the sake of the DAO.

I am beyond shocked of what came after first elections. This seams crazy to me that someone just take friends and make AIP to appoint them. Because that’s how everyone sees it. Not to mention that 3 people had their profile with most visits and most wallets voted after elected 5. They were never approached for anything. Seams like this plan was all along. It’s looking very bad I agree. I’m more then sure it will become a part of some investigation in the future. Besides some were not vetted by any agency. Absolute disaster planning.

I don’t quite follow what’s happened here - the wording and posts aren’t clear to me - however as someone that’s held some fancy positions of corporate governance, compliance and finance I’ll state that roles involving serious legal or fiscal responsibility must be filled based on merit not popularity. And every thing double-signed & audited regularly.

No shade cast on anyone involved. I have zero idea about them as people or their qualifications, intentions, or any fail-safes in place. I wasn’t set up to vote yet, so no issue there either. Not suggesting anything’s wrong here. This is just best practices I’m describing.

Sometimes qualified competent people run for positions and are elected. Sometimes not. Power via popular vote has serious risks, and it’s probably not different here.

Electing a steering committee to steer things in the communal best interests and as the community directs; that can work, but whomever is chosen to fill critical, sensitive roles must be qualified, vetted and ideally also voted on. Anything less can work out fine, but it’s a very slippery slope.