Author: The community (facilitated by @rdm_41)

This proposal presents the total ApeCoin allocation for the staking pools that would correlate with this AIP idea: https://forum.apecoin.com/t/aip-idea-staking-process-by-the-community/4109 and the three-year duration of this initial staking period.

In this idea, we will refer to the staking AIP Idea as AIP-6 & the ecosystem AIP Idea as AIP-7, please bear with us & understand that this is what we hope they will be numbered, but it subject to change & only for purposes of clear identification.

The creation of a staking process for ApeCoin as outlined in AIP-6 is designed to work with varied ApeCoin incentive pools and period lengths. AIP-7 presents the initial staking pool and staking duration.

As stated in AIP-6, in order for ApeCoin to become the preferred token of web3, early NFT adopters and existing and potential ecosystem participants should be incentivized through participation in activities benefitting the APE Ecosystem.

Staking Pools: The total ApeCoin pools that participants can earn from.

Staking Pool Type: The pool specifically assigned to a digital asset class; there are four in total.

Staking Period: Each period is 12 months.

Staking Pool Allocations: The total amount of ApeCoin allocated to each Staking Pool Type per period.

Pool Distribution: The spread of the staking allocation assigned across the period.

Incentive Distribution Curve: The schedule of ApeCoin allocated for incentives per quarter.

Total ApeCoin Staking Pool: 17.5% of the total ApeCoin supply to be distributed over the Total Staking Period of three (3) years. This will be funded by the Ecosystem Fund.

Note: The combined Staking Pool Allocations for the Initial Staking Period adds up to 100,000,000 ApeCoin tokens, or 10% of total ApeCoin Supply.

Note: The BAKC Staking pool can only be utilized if a BAKC NFT is being paired 1:1 with a BAYC or MAYC NFT. 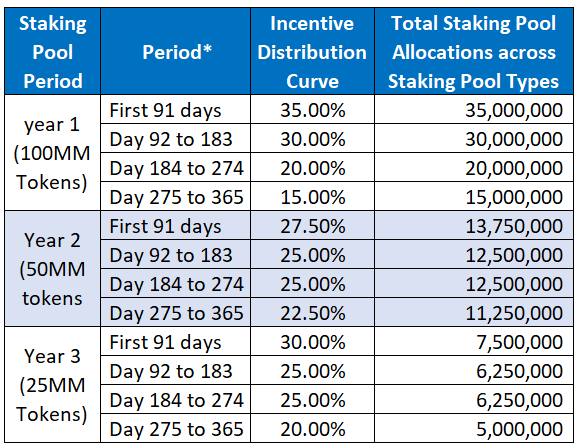 Upon deployment of the AIP-4 Staking smart contract on Ethereum, the total allocation of ApeCoin for this initiative will be sent to this smart contract.

Upon completion and deployment of AIP-6

As the development of the staking contract is complete prior to AIP-5 becoming active, the deployment of the ApeCoin isn’t an additional cost. This is presenting the pool to be utilized only.

Do you believe staking pool sizes should be forever tethered to floor prices?

I strongly and firmly believe that the Ape Coin only staking pool should be the largest of the four.

Good point. I don’t think we can reasonably tie the staking pools to the floors forever as it would become too complicated to manage with having to factor in token supply. The better way seems to be specifying an exact token amount for each pool, but not in a forever manner imo. I think we approve a proposal that specifies the next few years or even couple of years then take a look at things again then.

Remember this is just an AIP idea and has only been posted to gather feedback. The final idea will be submitted after the 7 day comment window so things in this above proposal are subject to change based on community feedback & input. Please feel free to comment on the google doc on my twitter.

How would you feel about a simple staking pool as suggested with bi annual voting done to alter said pools. Essentially every 6 months we come together and vote on if the pools need to be altered to be more fair and how to alter them. Appreciate the response and can’t wait to see where this is going.

I would be on bored with that. The other thing I have been thinking about is why the complicated Incentive distribution curve as previously proposed. As I said this is all subject to change until I submit the final draft version for review by the APE Coin DAO mods, so honestly I really like your idea to just do set pool sizes based on each NFT.

No need to weight the pools across quarters of the year, just a set pool for the time frame.

As far as the bi-annual voting, I would not prefer that often. I am good with annual voting to change said pool but bi-annual seems a little much. The proposal I will be putting forth currently has 3 years worth of allocation in it but I could be inclined to adjust it to a simple 1 year with the caveat that moving forward the Ape Coin DAO would annually need to vote to adjust the allocation for the next year.

adjust it to a simple 1 year with the caveat that moving forward the Ape Coin DAO would annually need to vote to adjust the allocation for the next year.

I would much rather prefer to do that, I think what you’re saying here makes a lot of sense to just focus on the time frame within the next year. It hasn’t even been a year since BAYC came out and things move crazy fast in this space, a lot of things can change quickly and trying to plan for 3 years for something so new in retrospect seems crazy. If we attack this in smaller chunks we can accomplish a better job at the parts we do tackle.

Yeah those are all great points. I think I will adjust the overall ecosystem fund proposal to account for looking at only the next year. I think that makes more sense long term. I appreciate your contributions to this idea very much ser.

Thank you @RDM41 for your ideas and the ApeCoin DAO community for the thoughtful discussions. A moderator will get in touch with the author to draft the AIP in the appropriate template. Once the AIP is drafted and meets all the DAO-approved guidelines, the proposal will be posted on Snapshot for live official voting at: Snapshot

Follow the here as further updates will be posted here in the comments. @RDM41 please see your messages for the next steps.