Ape Worlds is a no-code game experience using the Vy Worlds engine. In Ape Worlds, any BAYC fan can take Ape-themed game-building blocks and create their own games.

This would allow millions of fans to create and play games together in the BAYC universe and use ApeCoin as the currency of choice for Ape Worlds. 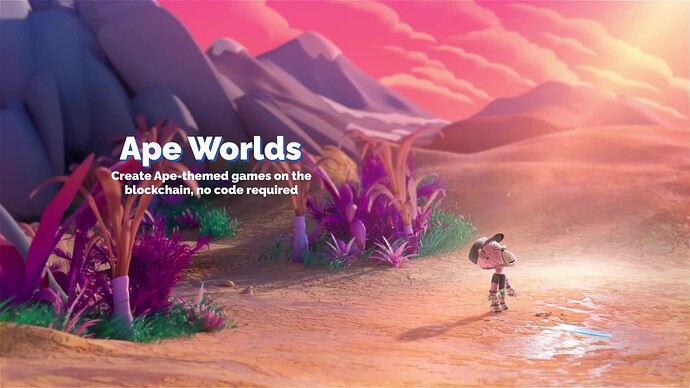 Motivation & Rationale - Why is this a good idea the ApeCoin DAO?

Ape Worlds would get millions of people into the Ape ecosystem and would empower anyone with an internet connection to make their own Ape-themed world, no coding skills required. We believe Ape Worlds could make a big impact for the ApeCoin DAO, including:

Currently, the games are Fall-Guys inspired and include racing games, score-based games, and eliminations games. In July, we are releasing our first 3rd person shooter game type and will release new game types regularly.

Our no-code game engine is easy enough that anyone can build a game. You can run around and click on anything to move it around and create your own games. 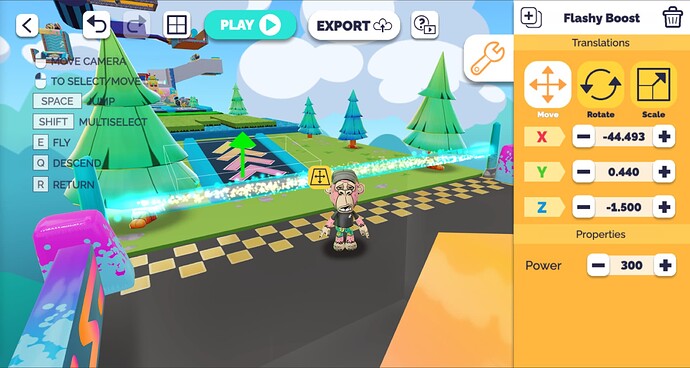 The characters in Ape Worlds games would be vinyl toys that are based on a few Apes that we could work out a licensing deal with. See examples below.

If there are BAYC holders interested in licensing their Ape for a drop, please tweet at @PlayVyWorlds with a pic of your Ape. We want to talk with you! 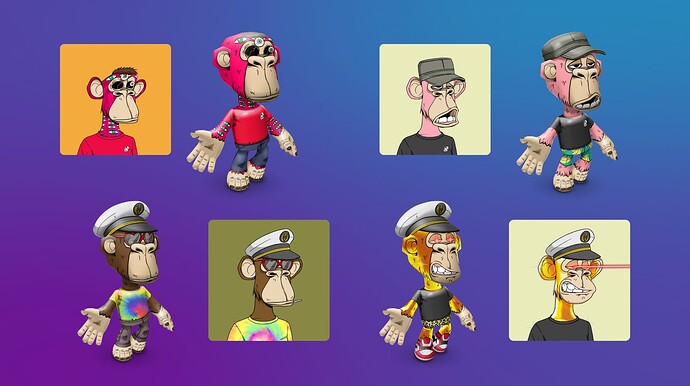 We are planning on reserving 5% (50,000 $APE) of the requested $APE tokens to make available to ApeCoin DAO members who help with testing and building the UGC games that are featured on the platform.

Creating a polished game experience is a massive undertaking and we want to make sure that members who step up to build the initial games and help with test can be fairly compensated. These tokens ensure we have support during development and 6 months post launch.

The Team behind the proposal (Knock Knock Games) 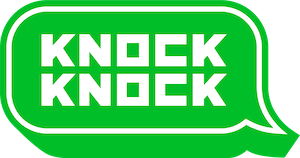 Ape Worlds would be developed using the Vy Worlds engine. Vy Worlds is backed by Knock Knock Games, an SF-based gaming startup founded by former Zynga, EA, Gameloft, and Jam City folks who have shipped games with over 100m installs and $500m in revenue.

About the Knock Knock founding team

Below is the roadmap to develop Ape Worlds. You can read through our roadmap overview deck that has additional details here. 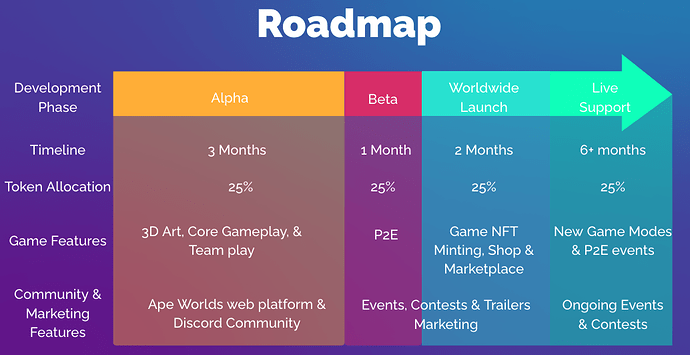 The current iteration of this proposal has the entire Knock Knock Games team, plus additional artist, animators, designers, and engineers (via hiring or outsourcing) directly working on this project for 6 months to get to worldwide launch, then supporting the Ape Worlds ecosystem over the long-term.

We are requesting 1 million $APE tokens to fund the development and marketing of the product. This is a big ask, but creating a game with a team of 10+ professionals is expensive.

Long-term, we will sustain the Ape Worlds ecosystem by taking a 5% fee on Ape Worlds NFT bought and sold and with additional NFT sales if there is interest from the community.

Milestone completion requests will be submitted by the Knock Knock Games team to the ApeCoin Foundation for review before the token allocation are released.

Ape Worlds will empower millions of people to play community-created BAYC-themed games on the blockchain, no code required. This is a big vision and has a team of veteran game developers behind it.

Our team recently joined the ApeCoin DAO and are excited to discuss this with the community!

Is millions of players a realistic goal? How do you expect to hit these kinds of numbers?

How would the tester $APE be distributed to testers and builders?
This would happen in the Ape Worlds Discord over approximately 9-12 months during the Alpha, Beta, and WWL phases. Only ApeCoin DAO members would have access to testing and game building contests.

Testers would get tokens similar to mods. Members who stand out as helpful and want a position could get promoted for a monthly stipend and would have a set of expectations they’d need to mint including: testing the game, reviewing UGC games, supporting member’s questions, and more.

How do I license my Ape to Ape Worlds?
Reach out to @PlayVyWorlds on Twitter and start a conversation. We are exploring a variety of deals, as this is uncharted territory. We would like to license 10-20 Ape and are open to working with entrepreneurial BAYC holders to make a playable vinyl Ape sale a big success.

Where can I learn more about Vy Worlds?
You can also join our Discord here, or play the game at VyWorlds.com. Our whitepaper has additional details.

My name is NoAutoPilot and I’m the Community Manager for Knock Knock Games. I’d love to answer any questions the community may have about our proposal. Let me know!

Is there any stats on how such platforms popular? At the moment I would prefer one high quality and deep game instead of the engine.

Regarding engine vs game question:

One more quick update. It looks like $APE actually works on Immutable already. Here is a screenshot of the Immutable store with items for sale in $APE.

We can mark that off of our list of technical risks

I spent some time playing the Vy Worlds alpha at the above link. I thought it was really fun & enjoyed the different game modes offered. Using the IP from certain BAYC members for creating ingame avatars seems like a good way to push the larger BAYC brand forward. So I like this!

I like that games can be created by users. That concept has been made really popular as a way for creators to make a living online in metaverse-type worlds & I think the market will see a lot of growth.

From a DAO perspective, we have several million Apecoin that can be alloted to games this year. One area of concern is allotting a large amt of tokens at once can result in them being dumped on the market. This could be made more appealing if tokens were paid out on a schedule.

Thanks 0xSword for the positive feedback & bringing up this concern.

Working with ApeCoin is a big opportunity and a long-term play on our end. I think allocating tokens on a schedule makes a lot of sense. The next iteration of the proposal will include this.

Here are two ways we could go:

Either of these would work on our end. Having a small lump at the beginning would be preferable on our end, as it would give us a budget for additional art and eng resources that we’d need at project kickoff.

Will this be solely browser-based? Is there any plans for a mobile app or to make the game a hybrid like Roblox?

The game currently works on mobile via web, but we do have an official mobile app on the project roadmap. On our end, creating a mobile app on iOS/Android isn’t technically difficult.

Our primary worry is getting approved by the platforms. Other games have been able to gain approval, so we believe it will be possible if we jump through the appropriate hoops.

Where can I find the roadmap

Knock Knock Games has scheduled a Twitter Spaces tomorrow @ 7pm PST to discuss their grant proposal. I’ll be on stage to ask a few questions about their team’s background, plans for funds, & roadmap.

Their official Twitter account is https://twitter.com/PlayVyWorlds and i’ll also tweet the space out. Lets get some eyes on this, it’s important that the DAO begins offering grants to creators of great games!

I tested Play.VyWorlds.com and it looks like a low effort copy of Fall Guys. It freezes all the time and looks just ugly, don’t think that we need to associate our brand with a low-quality copy.

Hey @ASEC, great question thx. I see our Founder @fridayyy shared a reply below, and I wanted to add a few thoughts.

User-generated content has exploded over the past few years - eg. Minecraft or Roblox. What’s special about these games, is it gives the player the ability to create games or experiences, that they can then share with their community and monetize.

The Vy Worlds engine would be similar in function, where it would provide the best tools for Web3 builders to make games. Builders would create games or experiences that they own, as NFTs, that players play, because they’re fun, and that drives ongoing revenue into the project, to develop and launch even more builder tools. It’s a pretty virtuous cycle of creation - earning - development - repeat.

Hey @sand here’s a link to our whitepaper where our WIP roadmap is listed. Happy to answer any questions you may have. Thx!

Hey, @wAPEd I appreciate the honest feedback, thank you. Our project is still in alpha, so what you see should be taken with that in mind. I also feel really great about what our team has done, in launching a Web3 game. Most P2E projects are vague whitepapers and stretched-out launch dates like 2024 / 2025. I think our approach here was a minimum viable product, to prove the market fit. And then from there, prioritize and improve.

So, I think all in all, we’re super early on an idea that seems to have gained some traction.

Yeah, it looks like Fall Guys. Original idea is crucial for this kind of collab

Hi Pearson, we have an AMA to discuss the proposal in a few hours (Thursday 7pm PST) with 0xSword. After that, we will make a final decision about moving forward and making any edits. Could you extend it for 1 additional day?

If anyone wants to join the AMA and discuss the proposal, here is a link:
https://twitter.com/i/spaces/1ypKdEgmdOnGW

I hope to see you all there!

@fridayyy has requested to extend the community discussion period for this AIP idea. This topic will automatically close a further 1 day from now.

We encourage the community to continue to engage in thoughtful discussions through constructive criticism, honest feedback, and helpful suggestions. Follow this Topic as further updates will be posted here in the comments.

Wow…I like it this idea a lot! The potential networking effect generated by sharing browser based game links via social media profiles is huge! Love it!

Hi Pearson, we had a great AMA with 0xSword today and are ready to take our proposal to the next step.

A few edits we want to make: