(You can follow this thread for announcements about different games joining the Ape Ecosystem. I’ll frequently return to share new games and updates on ApeCoin integrations!) 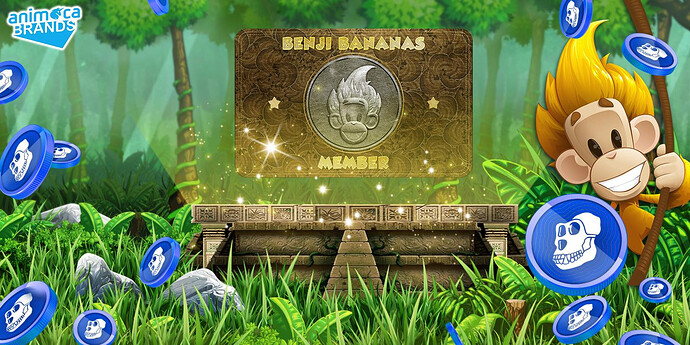 GAME INFORMATION
Benji Bananas has grown over the last 9 years to become a worldwide game. It balances a mix of fast-paced gameplay with strategy, while also rewarding players who practice mastery of the game mechanics. There are communities of fans and players throughout the world who love the product.

This game was acquired in its early days by Animoca and has continued to see great success and growth through consistent updates, responding to user feedback, and promoting a competitive 2-player mode. An upcoming play-to-earn integration with ApeCoin is exciting many players!

RECENT NEWS:
Benji Bananas has allocated 125,000 ApeCoin to be earned by pass holders. The game’s smart contract is currently undergoing legal and security auditing. It is expected that players can begin earning tokens that can be swapped for ApeCoin in the month of April with rumors of future larger earning pools.

I hadn’t realized Benji Bananas had such a deep history. Very interesting. 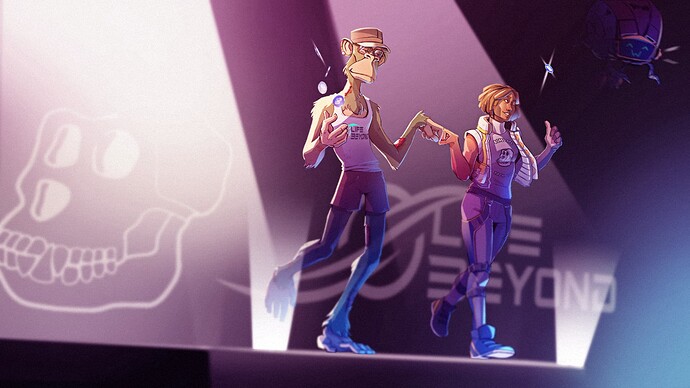 Introducing Darewise’s Life Beyond - an MMORPG with AAA development team

GAME INFORMATION
Life Beyond has been in development for a few years now. In this multiplayer online RPG players are sent to a distant planet to help heal the ecosystem. After arriving on Dolos they will setup bold player driven economies and governments as they unlock new regions. Early airdrops and playtests are currently going.

This game has been the main focus of this entire team since conception. It’s a project that is four years into development (par for the course) and there is a lot of recent news to indicate it will soon be possible for players to enter the world and begin settling on the distant planet of Dolos in the open alpha stage!

RECENT NEWS:
Darewise has joined the BAYC family and have acquired their first Ape (named Franck). They will be supporting ApeCoin in Life Beyond and look to make their mark as contributing members of our communities. The Bored Ape Gazette covered this extensively along with Animocas connection @ https://www.theboredapegazette.com/post/animoca-brands-acquired-gaming-studio-darewise-now-the-studio-has-joined-the-bayc-wants-to-use-ape

GROUP INFORMATION
Bored Ape Gaming has formed by 3 Apes who stream popular online games through both Twitch platform and Youtube. They’ve announced on twitter that there will soon be a discord opened up where you can join their adventure. It is speculated tthis group will play a big role in the upcoming Otherside!

WHY IT MATTERS
These gamers and streamers are ambassadors of our brands and communities throughout the gaming world. Following and supporting them is much like supporting front-line troops who will grow and spread our message. As these gamers earn respect and reknown, they attract more to our own ecosystem!

Very cool and comprehensive thread. Love what you bring to this DAO.

Thank you for the kind words and feedback. I’m really happy to be here! We’ll dive into these games to explore and play them. It’ll be a fun year!

Very cool and comprehensive thread. Love what you bring to this DAO.

Agreed, a ton of useful information.

GM everybody, thanks for this introduction! Wow, we’re really glad you took the time to talk about our project. I’m Ben Charbit, CEO at Darewise, the studio developing Life Beyond.

With Life Beyond, we’re building a new type of persistent game world. Players will be able to design, form, and govern new digital societies. They’ll have the power to decide its shape, economies and politics. It will provide the freedom to reflect real human aspects, both positive and negative.
Our goal with this ambitious game is to build entire communities and serve them with rich, immersive experiences, and connect them to create multiple worlds. We strongly believe in and embrace the Open Metaverse philosophy. With Life Beyond, we want to build one of its destinations

Speaking of which, we’re also beyond happy to be part of the Ape community. As you said, we really hope Franck, our beloved Bored Ape, won’t be on his own for too long on Dolos.

It would be a blast to create a bond between our incredible and dedicated communities and give you all a proper space in our universe. There are so many things that can be done and we’re excited for what’s coming in the future!

Feel free to take a look at our social media accounts to join the fam!! You already mentioned Twitter and Discord but a little reminder is always nice

: https://twitter.com/LifeBeyond / discord.gg/LifeBeyond /
We’re having an open alpha in June, the perfect occasion to come and try Life Beyond!!

Oh and I forgot… A special gift for you my fellow 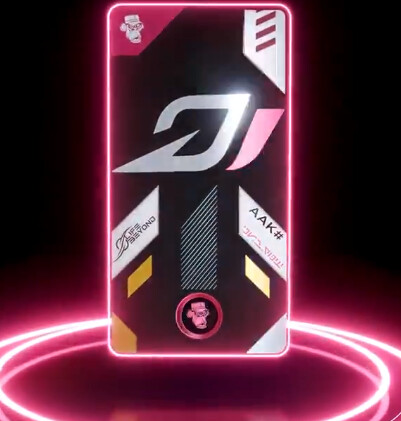 Look forward to more information in this thread as there are so little news about gaming for bored apes, but I think gaming portion has the biggest potential for its growth!

Hey! Thanks for feedback! Yeah, I’m excited too. I’ll keep writing everyday. It takes a lot of time to dig through these projects! Most of my day is spent following and curating information on the space.

I’ve got passes purchased for BB and Life Beyond, later we’ll see more information on Dustland, and also I’m getting access to some early Otherside developments. I think like you do, gaming is huge here!

GAME INFORMATION
Dustland is a move-to-earn audio adventure. When starting the app, the story begins and is continued as a player runs further. It’s compatible with a treadmill or along the sidewalks. Players earn $DOSE which can be converted to $APE with the member pass.

This is a great game for players looking to earn cryptocurrency rewards for their daily routine and additionally includes an audio story that feels much like listening to an audible e-book. Dustlands is an enjoyable experience which motivates runners to continue towards the next chapter!

RECENT NEWS
Dustland has recently announced App Store availability for iOS devices. They continue to host fitness webinars alonside information about their $DOSE cryptocurrency on their twitter accounts, and interacting with Buster (Dustland’s Bored Ape) is a fun experience they are promoting!

Are you sure that you can enforce Players earn $DOSE to be converted to $APE with the member pass?

Just like the Benji Bananas Pass, players who purchase Operation Ape pass will be able to convert earned $DOSE into ApeCoins! There is more info available on their website, here’s what I know: 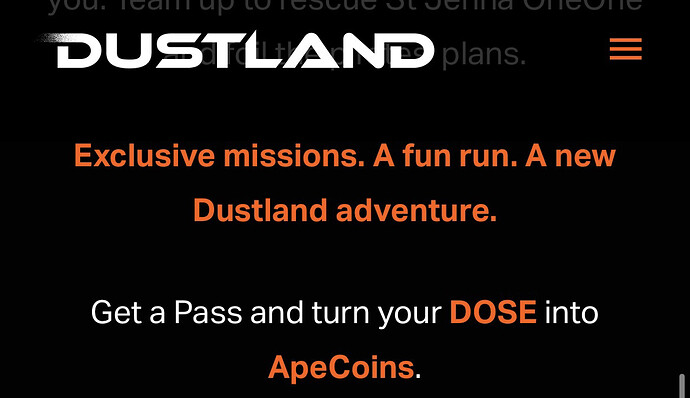 I’ll do a writeup soon about how Animoca handled their passes. It will likely be a different method that is used for this company, so I don’t want to speculate, as they are unique entitity altogether.

These aren’t controlled nor governed by ApeCoin DAO, instead they are independent companies adopting ApeCoin as a token that is swappable for their native token, ie: $DOSE or $PRIMATE.

I’ve got new announcements and information about these ApeCoin games.

Additionally, I’ll start including some information about upcoming projects that will be building within Yuga Labs Otherside. It’s a great time for building within the Ape ecosystem and many here are interested.

If you have news or secret alpha: send me direct message. I will be discreet if requested.

Benji Bananas has deployed the games liquidity pool and launched $PRIMATE on multiple exchanges. Players will earn this token in the game, which can be then be swapped for ApeCoin.

We’re still awaiting additional information. The Lightpaper is now available and the earning campaign details are expected to be released this week! You can read the lightpaper here:
https://benji-bananas-pass.gitbook.io/benji-bananas-primate-token-lightpaper/

Additionally, there is still an upcoming AIP proposal to add to the earning pool of this game. 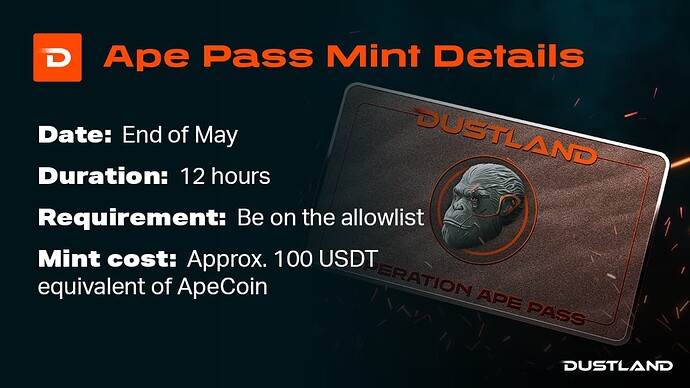 Dustland has announced their pass will be minting soon. Currently users can get onto the allowlist by completing ingame achievements or burning a small amount of Dustland’s Kettlemine NFT.

Complete information on the allowlist and mint are available @
https://medium.com/@DOSEToken/dustland-operation-ape-allowlist-live-now-b5c1cec5363d

This is one of the most unique use-cases for gaming NFTs as it requires physical activity and a focus on daily fitness goals. The Ape Pass is announced to mint in the coming weeks of May. 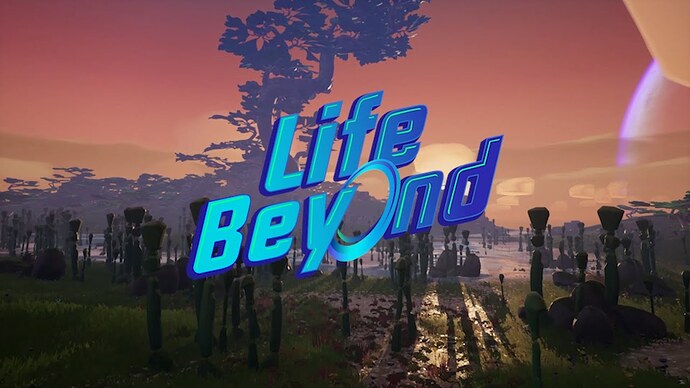 Life Beyond has begun airdropping Arpartment keys to Bored Apes and users who have signed up for the June Open Alpha. Soon gamers will begin running missions on Life Beyond’s planet of Dolos.

Darewise team has expanded to larger numbers than I had previously reported, now at over 100 team members. They are creating this MMO and have hinted at creating others as well in the future.

After recent acquisition made by Animoca and possible connection Improbable.io, this is one to watch.

COMING SOON BREAK ON THROUGH TO THE OTHERSIDE LFG

Good content with lots of useful information here.
Thank you @0xSword for providing these updates to us all, keep up the great work!

Thank you and you’re welcome! I’ll keep a close watch on all this stuff. I enjoy doing it. 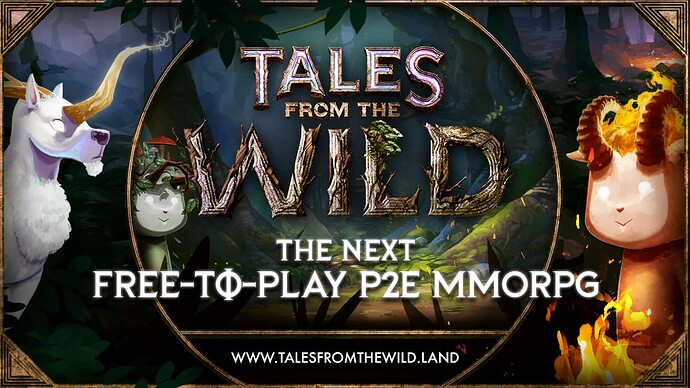 GAME INFORMATION
Tales From The Wild says they are building the next Harry Potter. Their 2222 avatar collection has just sold out and revealed. DOORS is a stoytelling studio 30+ professional authors and scriptwriters that have been active since 2019. Recently they’ve joined Ubisoft Entrepreneur’s Labs.

This game has a very transparent earning pool. It’s a great example of how companies and games can integrate ApeCoin as incentives to their community and player bases. It’s exciting to dive into their active discord & twitter community, and they just may deliver on “being the next Harry Potter.” 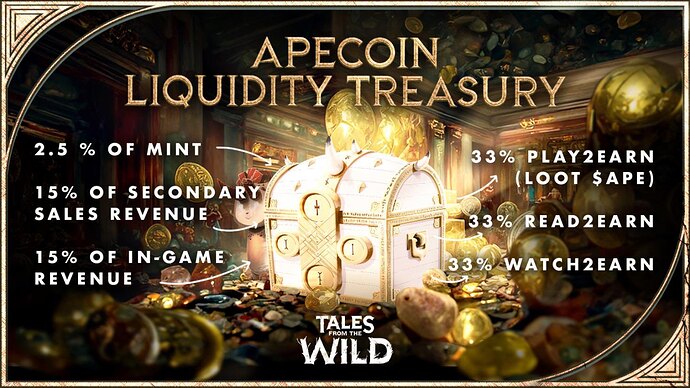 WHY I’M EXCITED
This is a great example of how a game and project can incorporate ApeCoin as incentives in a transparent way. Additionally, these players become small holders of ApeCoin who are now invested in our ecosystem and the future of ApeCoin as a whole. I’m very happy to see this!

There’s a couple of notable gaming things happening this month! They involve many Apes in the community, so I definitely want to highlight what’s happening. Let’s talk about some cool gaming stuff!

BENJI BANANAS
The reward campaign for Benji Bananas play-to-earn has started recently. Players are being rewarded in $PRIMATE token for holding the passes, each week recieving a drop of primate that has averaged ~$100 in tokens each time. Competitive ingame rewards will start soon too!

Week one and two rewards have been sent, week 3 snapshot ends…today? Requires KYC so be sure to do your own research if you jump into the Benji Bananas project and want a quick reward.

LIFE BEYOND
Don’t sleep on this one. In an above post here, the CEO of Darewise announced an airdrop to all the Bored Apes holders. In your wallets should be a pass for Open Alpha starting at the end of June.

Additionally, it’s now been confirmed that Life Beyond has been partnered with Improbable since ~2018, so the tech used in Otherside will be present in this game. Animoca acquired a large percentage of Darewise(parent company of Life Beyond) in early April. Life Beyond could be the earliest look into what the Otherside is like - and each Ape holder has a key with exclusive benefits.