Allocate 13,000 APE to sponsor a Prop House program for the Meebits community, with the goal of the program being:

Microgrants of 1,000 APE each will be allocated across 3 rounds. Each round will begin with a 10 day period, where anyone can request funding for an idea that will 1) expand the functionality and awareness of Meebits; and 2) incorporate ApeCoin as a payment method if payments are involved. At the end of the proposal period Meebits NFT holders will select the grant recipients by voting for the proposals they like best.

If the underlying mission of ApeCoin is to power the Web3 economy, we need to be encouraging other communities to adopt ApeCoin and build utility alongside us.

Meebits were released with 3D voxel files, meaning these are NFTs that can be used in gaming and metaverse applications. I made this dancing version of my Meebit in one afternoon. There’s a lot that can be done with Meebits, but to date the community hasn’t had the funding or resources to build utility for their NFTs.

Prop House serves as an auction of APE, where the bids are proposals. It serves as a mechanism for providing micro-grants to the Meebits community. Rather than having the DAO vote yes/no on individual projects, Prop House allows for a group of projects compete for a fixed grant size, with grants being awarded to the project(s) that receive the most votes. Prop House voters are typically NFT communities. Here are some of the existing Prop Houses with micro-grant programs in place: 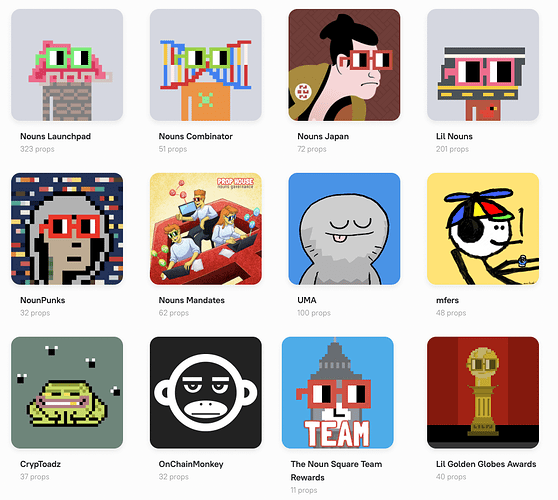 Prop House will be a funding mechanism for the ApeCoin DAO to engage other communities. In success it could also be used to fund microgrants for ApeCoin projects too. Funding this AIP will not affect the current DAO AIP proposal process.

If successful, we could replicate for BAYC/MAYC as well as other communities! Meebits feels like a good community to start with given the assets are 3D Voxel and can be used in games.

The purpose of this AIP is to experiment onboarding other NFT communities to ApeCoin and using a different funding process for micro-grants from the current AIP process. If successful, this project can be used as a blueprint for expanding ApeCoin’s audience and utility.

Meebits and PropHouse are the perfect partners to experiment with. As part of the Yuga Labs family, Meebits is naturally aligned with the goals of ApeCoin and should be actively encouraged to build alongside the $APE community. When possible, we shouldn’t try to build everything ourselves and from scratch; PropHouse is a proven platform with a dedicated tech team to maintaining it. A few KPIs to highlight for PropHouse:

Encouraging other communities to build with ApeCoin proliferates our reach and introduces new communities to our ecosystem. Prop House is a way for us to experiment with this hypothesis. We can fund micro-grant programs for various communities that want to build utility in gaming and the metaverse, but don’t have access to funding.

An example of what the rounds and voting looks like can be seen here (a new UI is launching for houses and rounds in the next 2 weeks, so this will be updated): 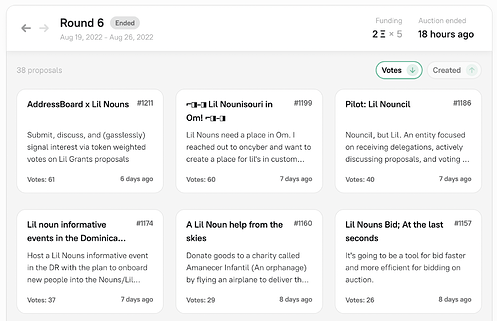 Benefits to ApeCoin are:

Prop House has accomplished a lot in just 6 months of the program (more context here):

If the proposal passes, Prop House will create a Meebits house that will have its grants funded in APE. Here is a mockup: 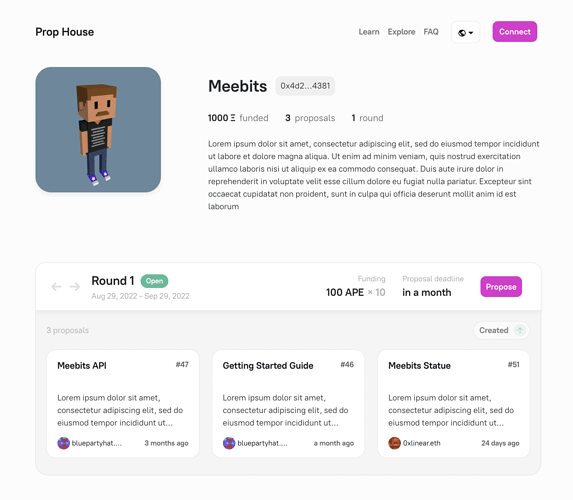 Total being requested is 13,000 APE to fund 3 rounds of grants. This breaks down as:

Grant funding will be available anyone, not just Meebits NFT holders. However, every proposal must meet two specific criteria:

Once a round is opened, teams will have 10 days to submit their proposals. After that, voting will open to Meebit NFT holders for 1 week. 1 Meebit = 1 vote. NFT holders can split votes (i.e. if you hold 2 Meebits in your wallet, you can allocate votes to 2 different proposals). At the end of the 1 week period, the project(s) with the most votes will receive the grant funding. APE will be automatically sent to the wallet addresses.

Some rounds may include “mandates”, similar to what Nouns did with its recent “Governance Mandate”: 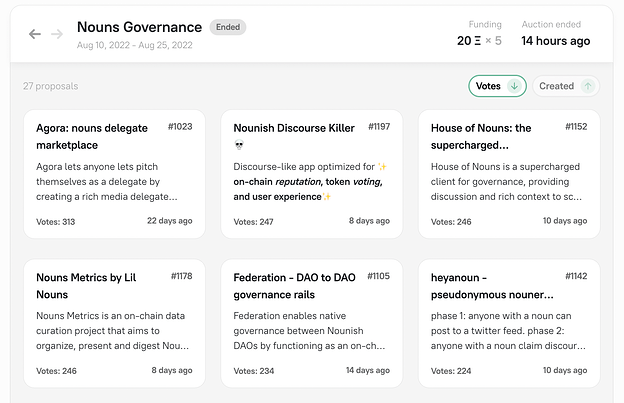 This helps us direct attention and resources to problems or opportunities the Meebits community can tackle. Some ideas for mandates could include:

What type of proposals are expected?

Proposals that further proliferate the utility of Meebits. We ask that projects also consider including ApeCoin utility in their projects.

Who can submit proposals?

Who can vote on proposals?

Any Meebits NFT holders can vote on proposals.

How can ApeCoin DAO ensure that the work will be properly executed?

While assurance of proposal execution is not possible, we minimize the risk by putting the funds into the hands of credible proposals which are selected by the Meebits community. We rely on social reputation, relevant experience and other norms to maximize the chance of seeing the proposals through to proper execution.

Though outdated, we can look at historical Prop House KPIs to gauge the efficacy of the program. As of 6/18, roughly 18 proposals had received funding for a relevant period of time. Of those 18 proposals, only 1 was a no-show.

Why not offer this for BAYC or MAYC instead of Meebits?

ApeCoin will be most successful if we give other communities a chance to build with our support. BAYC and MAYC are already in the ApeCoin family, and have access to billions of treasury assets through the current AIP process.

This is an opportunity to open up the ApeCoin ecosystem to more communities.

Funds requested from the DAO will be distributed as following:

Wallet that receives the funding will be a 2/3 multisig. Details for the multi-sig to be provided prior to the official AIP going up for a vote.

As soon as the proposal is approved, we will begin working with cryptoseneca from PropHouse to implement the experience. We expect this to take ~2 weeks.

Once the UI/UX is created, we will begin round 1 of the program. Teams will have 10 days to submit their proposals. After proposals are submitted, voting will be open to Meebit NFT holders for 1 week.

I am 100% supportive of the mission to expand to other communities beyond BAYC/MAYC, but couldn’t we also fork this proposal to spin up BAYC/MAYC projects faster and with less friction than the current AIP process?

Yes, definitely. I don’t think prop house should replace the current AIP system though, and I think this is a good opportunity for us to try something new with a different community.

If successful, we should definitely replicate for BAYC/MAYC as well as other communities! Meebits feels like a good community to start with given the assets are 3D Voxel and can be used in games.

Love this concept! There is a lot of value in bringing in other communities and encouraging them to build cool things that utilize and grow the adoption of ApeCoin.

Also like the PropHouse model that allows projects to be voted upon and funded in a quicker manner than our current, more formal AIP process.

Absolutely love this AIP, and personally appreciate your dedication to seeing this DAO thriving @maariab. Some of us in the community have been deliberating on the right format to “infuse” other communities with $APE in a meaningful way that would also encourage them to incorporate ApeCoin as a payment method.

I would like to see this exact same proposal for the World of Women community.

Hey this is a good way to get other communities excited and using ApeCoin. The other people in the thread have covered my thoughts on the matter too. It’d be great to support World of Women in the same way. It’ll be fun to see how the Meebits vote for different ideas in the prop house!

I forgot to disclose that I own 2 Meebits. this proposal does not financially benefit me as a Meebits holder and I don’t plan to submit a proposal for the prop house. I also will abstain from any votes related to this proposal in my capacity as a special council member, as well as if it goes live to vote on snapshot.

I’m good with the feedback, thanks!

Thank you @maariab for your ideas and the ApeCoin DAO community for the thoughtful discussions. A moderator will get in touch with the author to draft the AIP in the appropriate template. Once the AIP is drafted and meets all the DAO-approved guidelines, the proposal will be posted on Snapshot for live official voting at: Snapshot

Follow this Topic as further updates will be posted here in the comments. @maariab please see your messages for the next steps.

@maariab has completed editing their AIP Idea to be their AIP Draft.

Our team has reviewed and discussed @maariab’s AIP Draft and have sent a list of initial questions. We await answers.

If the underlying mission of ApeCoin is to power the Web3 economy, we need to be encouraging other communities to adopt ApeCoin and build utility alongside us.

Completely agree with that! We should reach out other communities and find new ways to build utility with $ape.

Maybe the best idea in the DAO.

@maariab has responded to our questions and they are in our review once again.

This proposal is live for Snapshot vote at Snapshot. The voting period closes next Wednesday at 9PM ET.

The voting period has closed for this proposal and it has been accepted with a 97.86% pass rate. The proposal will be passed on for implementation.