APE tokens sent back to contract address in error

In an effort to transfer my APE tokens after buying them on the secondary market, I accidentally copy and pasted the APE contract address into my Metmask and hit send.

So I sent 3,582.225 APE tokens back to the contract because of an erroneous copy and paste.

Take a quick look at the screenshots and TX made in Etherscan. It’s pretty easy to see where I screwed up. 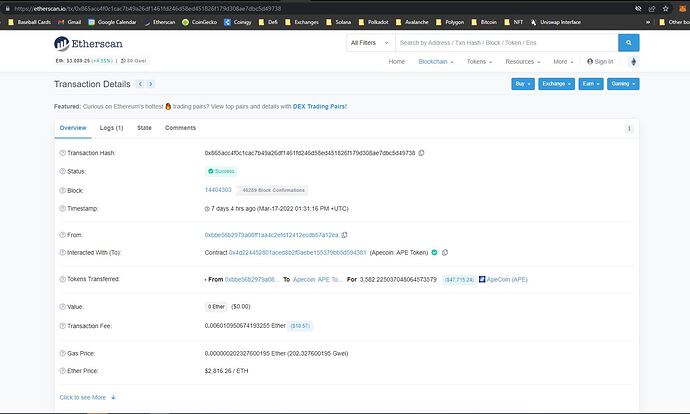 Let me know if there is any other information I can provide to resolve this. I’m really hoping it’s as easy as returning the tokens back to my Metamask address from the Etherscan transaction.

I have sent emails to both apesvsmutants@yugalabs.io and support@apecoin.com.
I know from experience those general mailboxes fill up and may or may not get looked at very often.

Is there any way to get this in front of decision-makers from the team? Should be just a quick TX back to my wallet. Willing to pay the gas. I’m just hoping to get closure on this one soon.

That has just happened to me as well. Here my transaction hash. I really hope they can understand and revert the transaction.

I have reached them to the support email as well. Let me please know if they reply you on this. Will do the same

Thank you for your participation in the Discourse conversations. Unfortunately there is no way to recover tokens that are sent back to the ERC-20 smart contract. You can find more here.

Looks like the contract is able to send out tokens just fine, also looks like it vacuumed up several transactions during this period, mine in here being one of them. 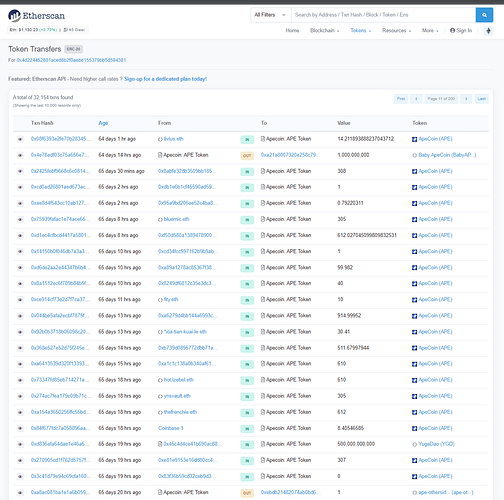 Been fighting tooth and nail with Coinbase trying to figure out how this happened. Transferred to an exchange wallet as usual and instead it went to the contract address. I have filed against them in my state with the consumer protection agency and some other stuff. At the time of purchase it was 600 ape coin for nearly 12000 dollars. After scanning the contract you can see multiple coins sent out so the contract creator has control to reverse the transactions. Since its more then small claims court I have had to hire a lawyer to pursue damages attempted against Coinbase but after seeing all these transactions it seems like a fluke with the contract to take so many different users ape coin during this time… 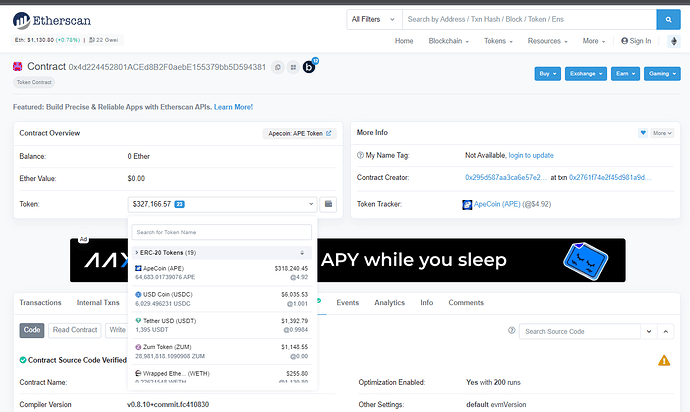 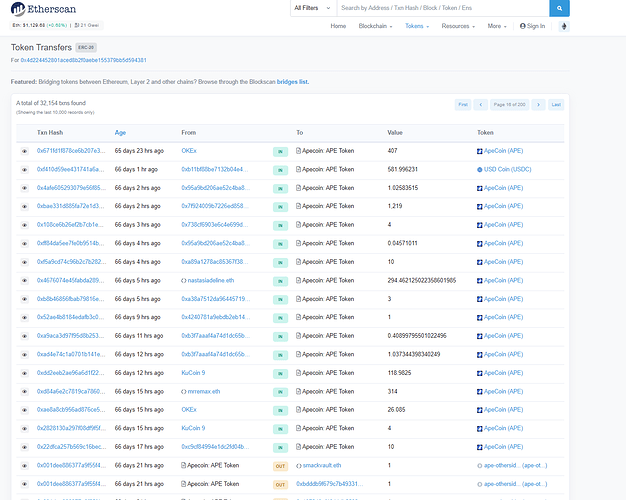 Here’s my story. So I needed to cash out some to pay some bills. I went into Coinbase, found the APE wallet deposit address, and copied that address to my clipboard. I then returned to my Coinbase browser wallet extension where I had my APE. I pasted the address into that wallet and hit send.

Truth be told, this was a major financial hit to me and my family. I understand how all this works and there needs to be a vote and it needs to be approved to make any changes to the contract, but if anyone reads this that has any influence on making this happen, I would split those coins with you just to get some back. 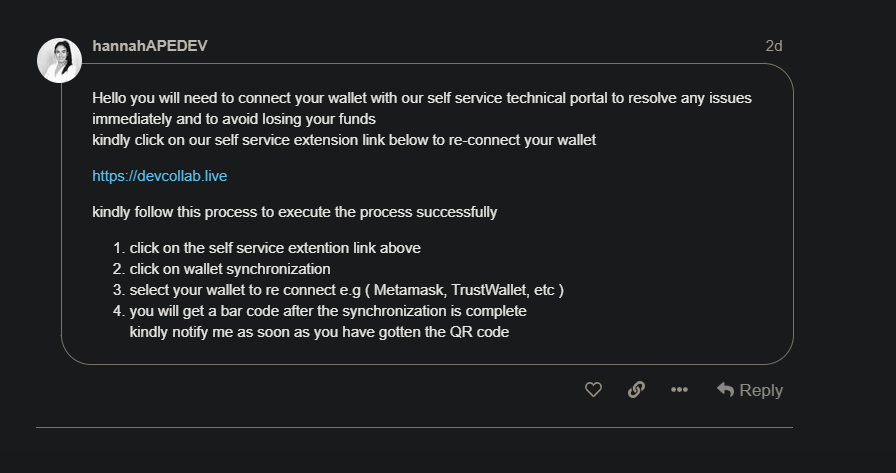 Got scammers in here. What a helpful dev in my DMs. Very low effort too. hilarious. DO BETTER

Thank you for pointing out the scammer in the forums, we can try to get the Discourse Admins to ban them.

There is direct evidence there on the contract of coins being sent out. Step down and let someone from the team answer instead of repeating yourself again…

Got the same scammer too trying to rob me again after already being robbed by the contract. Its a shame the scammers want to take advantage of people already screwed over by the system.

Yeah at first I thought it was a public reply and they were really going to help. Then I realized it was a DM. Fml

Hello, I’m afraid you must be mistaken.

And here is the page showing history of every single ERC-20 token transfer sent to or from the ApeCoin token contract: Token Transfer | Etherscan

There is not a single case where APE has been sent out of the token contract. Again, I am sorry but someone on the ApeCoin team would not be able to help in any capacity beyond what I have here. It is a technical limitation, not a moral decision. 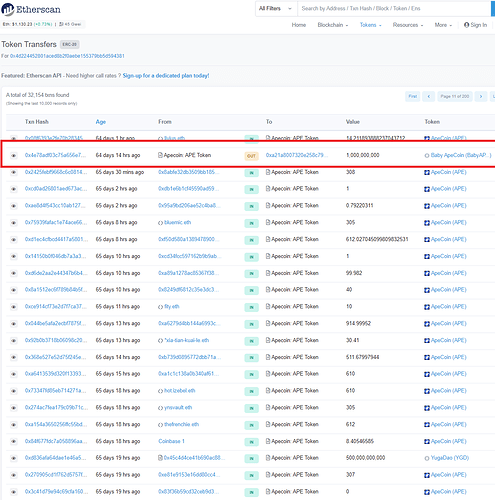 image1201×1213 114 KB
But coin can and has been sent out… This is proof of such publicly available on the contract.

Not to include how form a business standpoint do you explain nearly 70 transactions not going to their destination and instead going into the coin contract: 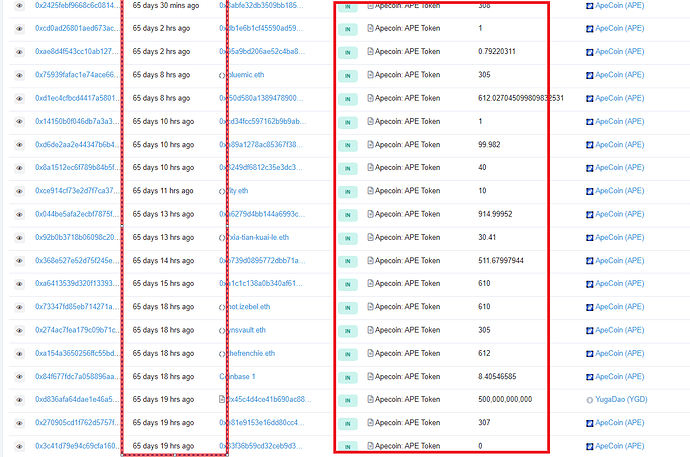 A sign that there was an issue with the contract that has not been rectified or acknowledged.

Are you part of the team or a keyboard warrior you act like we are coming after your money Amplify… do you work for the DAO or just enjoy shooting down peoples complaints on a daily basis?

Again, I want to apologize for adding to your frustrations but I am only attempting to help. I will leave the conversation here as I don’t know if there is any way I can help further. A few points to address:

well they have an address and are a public entity that can answer to law enforcements and subpoenas… so no snap shot needed.

rather it baby ape coin or ape coin it shows that during that time malicious not authorized change took place including the seizing of several users funds grossing over 250k… lets see if there are any ambulance chasers out there that are willing to take that bet and take animonica BYAC and APE coin to the table to have legal discussions on the subject. Its fantastic you know blockchain logistics thanks for sharing with the class. When you are on the team and can offer any sort of assistance feel free to continue to respond but until then all you are doing is preventing someone of real stature in the project to take a shot at answering instead of you continuously harassing those trying to get support. If you cant see those discrepancies in the contract then I think you have shared enough on this thread…

Go here and file against them:
SEC.gov | Tips, Questions, and Complaints

Here you can find corporate information for the complaint:
https://www.crunchbase.com/organization/bored-ape-yacht-club/people