Add “Individual User Votes” or “Individual Wallet Votes” (Name TBD), right below the “Current results” metrics on Snapshot to better inform readers at a glance of how many wallets actually voted for or against an AIP.

Adding this metric will give a user a better story of how many users are actually for or against a particular AIP at a glance regardless of how much $APE they hold without having to manually drill down.

I find myself looking for this metric and thought why can’t it just be displayed.

Add this metric below the “Current results box” - this will not affect the outcome of the vote but helps tell a more accurate story of the vote. Would look something like the following: 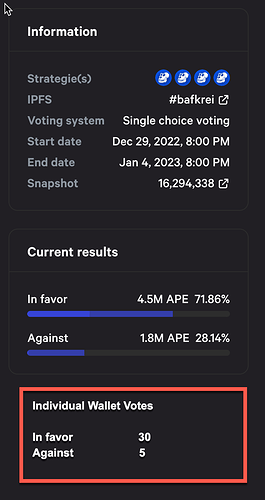 Unsure, perhaps there is a plug-in already built in?

As soon as possible

Unsure, perhaps the price of the plug-in if there is one?

Really like this, SC elections showed us how important this metric is. Nice one @foxSlightly

I love this idea. Would it include votes under a certain threshold?

I think we can iterate to include certain tiers in the future, for now I think any wallet that votes will equate to 1 no matter how much $ape they hold

Great idea. More transparency and data that is easier to access

I really don’t get how this is of any benefit - to know you lost but were still favored serves what purpose?

Also undermines the delegation process imho - as kind of ilegitimises the votes no?

I really not a fan of current voting setup, but making addons really not gonna make it any more palatable imho as rn only votes count, not voters.

It doesn’t affect the proposal at all, but if the voting process were to ever change in the future it would help to have this data easily available to analyze.

For instance, maybe someone wants to change the voting system to one wallet = one vote but seeing the data on past proposals might show there might be some unintended side effects of that.

Problem I see with this - someone has 10K APECOIN, they spread it out into lets say 2.5K wallets, 4 APECOIN in each, as I’d assume metrics would disregard any votes under 2/3 APECOIN - and they then deploy those 2.5K wallets to VOTE, what does the VOTER COUNT or WALLET COUNT then prove, but to falsely change others minds on their original voting?

Also, all those that are disregarded, surely some are legit?

I just think we look at other voting altogether or at least pick several and attach to different voting aspects.

Yep your example is similar to one I was thinking of. Looking at one wallet = one vote can have negative side effects like the one you described above.

Hey @furiousanger!
Again, this does nothing to affect the actual votes - this provides insight at a glance for those who seek it - I know a few people who do go through and manually count to see what the actual votes are just to get a better glimpse of how many votes are actually for and against proposals (myself included) - in terms of delegated wallets, yea it won’t be accounted for at the first iteration but perhaps those wallets can be weighted according to how many were assigned to it on subsequent iterations (if its easy enough to add in). Though I do agree with you that the data set will not be perfect for wallet spreads, but I do think that it does add a clearer picture for those who seek it, for others, they can ignore.
I would only want to do this if the cost is nominal for the DAO, ideally there is already a feature built in that we can flip the switch on or plug in already available.

Great to see you submitting an AIP! Love the idea! I used to do a rough count in my head before @RedVulkan started pulling the data. He can find out a lot of interesting stats!

I talked to Vulkan and he is going to add this metric to the ApeComms Dune Dashboard he manages when he has some time: ApeComms. I still think having it on Snapshot is a great idea so more people can see it. It’s interesting to see how different the results on some of these AIPs would be if it was 1 wallet = 1 vote.

Imo, “Individual Wallet Votes” would be a better name. In my mind a User implies one person. I have my apecoin split in different wallets and know there’s others that do as well. There may also be bots that try and game the system.

Do you know who you’d need to contact in order to research how this can be done and how much it would cost? Cartan currently runs Snapshot, but don’t know if it would be outside their scope of responsibilities.

Thanks so much for your proposal! Look forward to your reply!

I mean, no system is perfect. But as @foxSlightly mentioned, it’s not like this affects the actual outcome of the vote. It’s purely a metric.

Also, most voters tend to keep their coin together as a matter of convenience. The gas fees alone would be incredibly prohibitive from a practical standpoint if one of the only reasons a voter would spread their $APE out to that many wallets is to impact an analytical metric that doesn’t even influence the final outcome.

Thanks @adventurousape
To be honest, I do not, I am quite new to snapshot and was hoping for some guidance but I can do some digging around though

There were some strange things going on with wallets with small amounts of ApeCoin happening during the Special Council elections.

If you removed the wallets with less than 2 ApeCoin, you get different results. Not sure what the motivation for someone to try and game the system this way would be though, since like you said, it doesn’t affect the outcome. 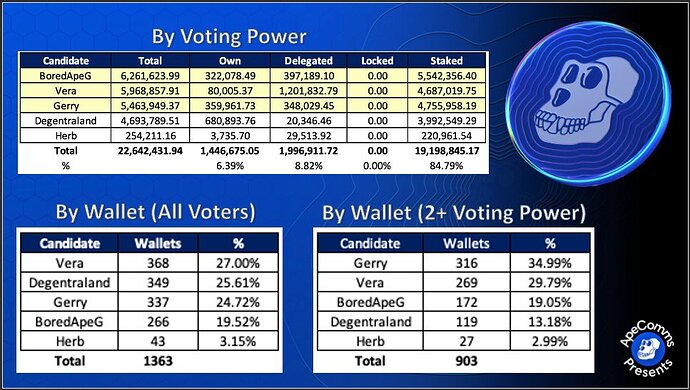 Hmmmm… I will say, that IS some interesting data. Perhaps I may have spoken too soon

Seems an excellent idea, more insight is rarely a bad thing, even if the data doesn’t impact anything now it informs decisions down the line.

I actually find this data interesting always, and have shared it on the discourse previously, that exact table.

My issue is this - all voting should not be a popularity contest, I KNOW THE DATA WILL NOT EFFECT THE ACTUAL VOTE COUNT however, it may effect the VOTE as displaying TWO figures only, may actually impact the vote as people just jump onto what they perceive is the most popular, but in reality this figure can be easily gamed by creating wallets with APECOIN above the cut-off you’ll exclude, for example in th table abeove anyone with over 3 APECOIN would count, so if we state that ‘OVER 3 APECOIN COUNTS’ then the game is on and wallets will be created with 3+ APECOIN.

Maybe I’m not articulating my issue too well?

I see the POPULAR vote from the TWO added (easily gamed stats) and does or will this change my vote?

I think what you are trying to do is change the VOTING SYSTEM without changing the VOTING SYSTEM, do you see what I mean and why I think we need to address VOTING MECHANICS/PROCESS for certain VOTEs, maybe we have different VOTE TYPES for elections and AIPs etc etc, I just think adding extra stats, that can be gamed very very easily, onto a system that is not fit for purpose imho, is a bad idea. 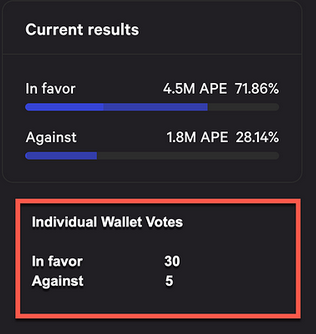 I also think the table you added is around the wrong way and never like that in reality.

So would seeing these TWO STATS influence VOTES/VOTERS?? Is my concern.

This is my point, I know the STATS do not impact on the actual VOTING MECHANIC.

I just think this is a slippery slot and maybe very influential and also be inclusive of easily gamed stats once the threshold for cutoffs is announced.