I think $APE can do better, instead of give away $APE tokens for free, we should implement a vested escrow voting system that rewards holders that are commited to $APE DAO. The next image explains the process itself. 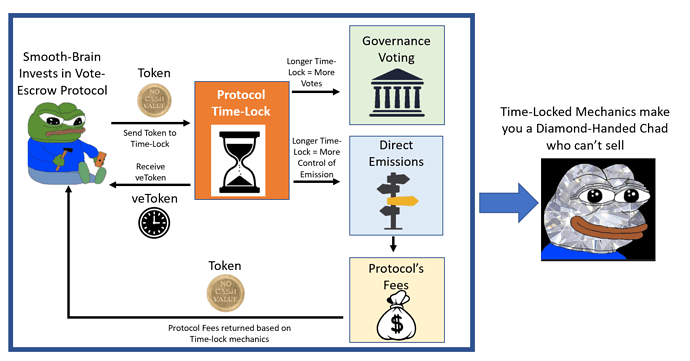 So instead of giving for free $APE tokens to the bigger whale that passes by, we reward with tokens to people that time lock its tokens and also that people will be the voice of our DAO.

Okey, you are right, but what about BAYC holders? I didnt mention it because rewarding them should be on a complete different proposal. BAYC is the most famous NFT in the world, maybe we can talk with the top NFT marketplaces and incentivaze if holders offers its NFT on a price range around the current floor price, we can even build protocols that have BAYC holders in mind (borrow/lend protocol maybe) but staking its a different thing IMHO.

I’ve talked too much, What do you think?

I propose something alike regarding the time factor and is being discussed in this post :

Let's talk about the Staking Pool for just $APE General

Yes, it is like you said but a step further. I try to tie rewards and governance with the vested tokens. Just the ones who are willing to vest their tokens for a period of time have the right to vote proposals and get rewards.